Points to think about before breeding :

If you do decide to breed we still recommend neutering afterwards. 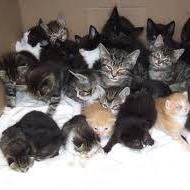 An un-neutered female cat could be responsible for 20,000 descendants in just 5 years!

Have questions about Neutering?

Bitches and queens do not need to have had a season before they are neutered .

Health benefits are actually greater the earlier they are done.

Northvet is a member of